A number of NSWFAA members attended the triennial WAFA World Flower Show, hosted this time by India in Jaipur in February 2020.

Madhu Shah was invited to be an Honorary Judge, Kim Baillie, Judith Little, Cecily Rogers, Lanny Pramana, Gwen Hartley and Fae Gill all competed. Ngaire Gamack and Christine May had to cancel their involvement at the last minute.

Judith, Cecily and Lanny all received awards for their designs.

Madhu Shah was invited to present on behalf of Australia at the World Flower Council annual summit (September 2019), this time in Bali. The theme was body flowers to be placed on a model for a parade. 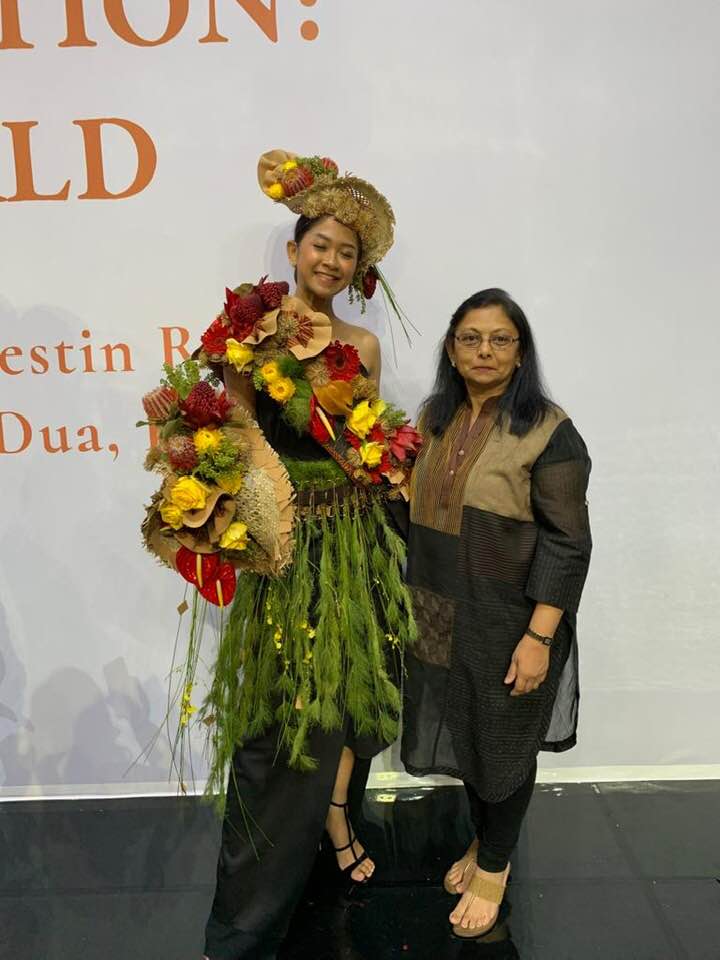 For the first time, the World Flower Council held its annual summit in Brisbane in September 2018. Helen Mitchell (from Taree) was successful in having her design selected by AFAA to represent them. NSWFAA members Kim Baillie, Madhu Shah and Mary Fairlie-Cuninghame assisted in the construction of the design as well as staging a number of individual designs to the reception area. 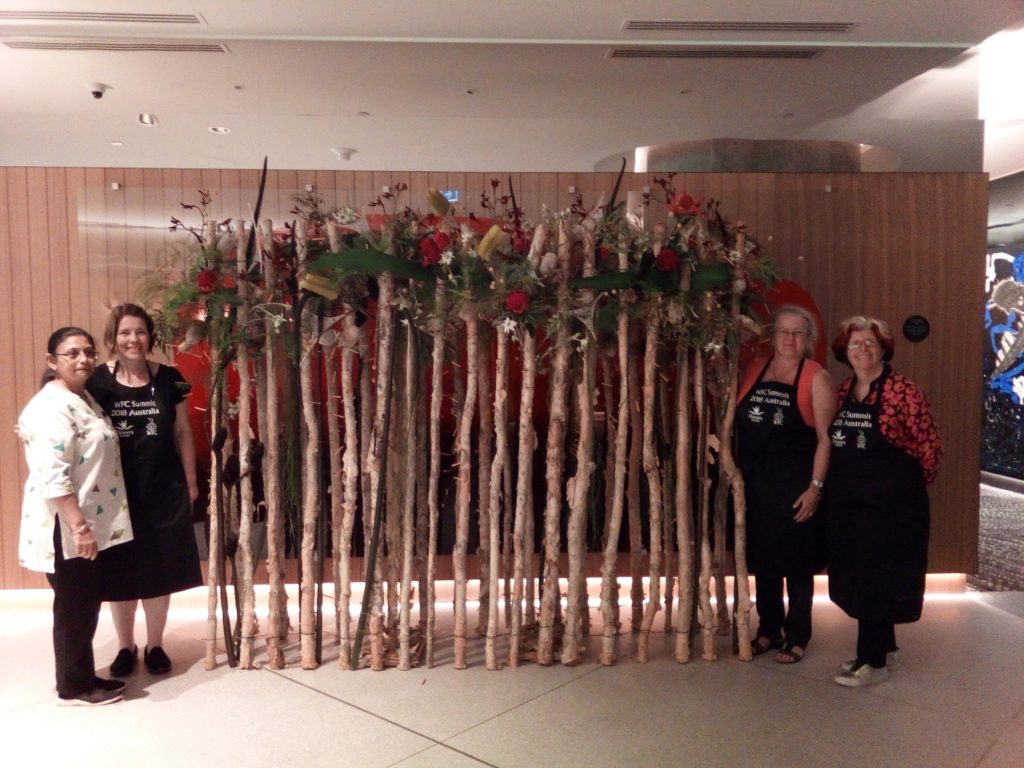 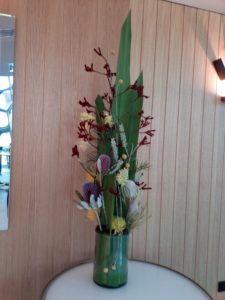 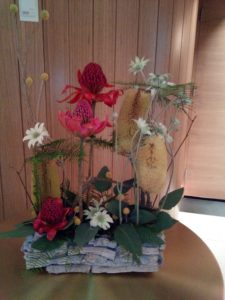 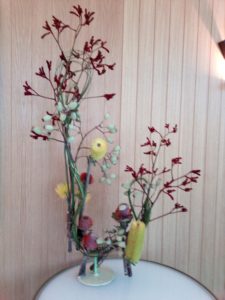 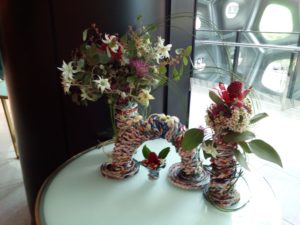 Congratulations to NSWFAA member Anne Deveridge,from the Mid North Coast Contemporary Floral Design group, winner of this year’s Ann Williams Clark medallion from the Garden Clubs of Australia. Anne was presented with her award at the NSWFAA AGM in Gloucester.

The GCA Ann Williams Clark medallion is awarded to a member who contributes significantly to the nominating organisation. Anne was nominated by NSWFAA on the suggestion of Madhu Shah and Mary Sweeney. Here is an excerpt from the nomination submitted to GCA.

“Anne has been a member of the NSW Floral Art Association for over 20 years. She is a founding member of the NSWFAA Contemporary Floral Design Group, who meets monthly in Smithstown NSW. The group was formed 10 years ago, and is open to all floral designers in the Mid North Coast area, with members coming from as far afield as Port Macquarie, Coffs Harbour and locally from the Kempsey and South West Rocks Areas. The group is open for beginners to the more experienced; and Anne is always happy to share her expertise with newcomers, in a friendly inspirational manner, which is appreciated by everyone.

After an extensive two year training period, Anne gained her NSWFAA Floral Art Judges badge in 2001. Anne is a kind and a respected Floral Art Judge – highly sought after at many Agricultural Shows in the country areas. Over many years Anne has judged at Agricultural Shows in Coffs Harbour, Macksville, Wauchope, Walcha, Gloucester and Kempsey – being invited back more than once in many cases – such is her reputation as a judge, which is valued for her opinion and expertise. Anne has also judged at many of the quarterly NSWFAA meetings, the ABC Gardening Show, when held at Sydney Olympic Park and Rosehill Gardens.

In 2009 Anne was on the organising committee, of the NSWFAA International 3 day “Floral Australis” Exhibition and Show held at Sydney Olympic Park. This show was four years in the planning, with competitors and participants coming from all States of Australia and Overseas.  This was the largest Exhibition and Show of Floral Art in Australia, then and up to the present date. Anne competed and judged at the show, as well as designing a stunning glossy Floral Art Calendar, which was given complimentary to all delegates, and also sold to the public.   At this time Anne also organized for greetings cards to be made, which were also well received by overseas and interstate floral art designers.

In her local township of South West Rocks, Anne has organized general meetings/workshops and floral art demonstrations for NSWFAA members, who coming from all parts of NSW, Queensland and the ACT. These workshops are held over 2 days with Anne organising accommodation, catering, visits to local garden nurseries, tourist attractions and encouraging the support of local community groups, highlighting floral art in the area.

Anne regularly enters the floral art section of the local South West Rocks Garden Club, of which she is a Life Member. At the last GCA Mid Coast Zone Day held at the SWRGC, she demonstrated floral art with another Life Member of the club Anne Kennedy.  As well as designing beautiful table displays.”

Well done to all who travelled to WAFA Barbados “Flowers in Paradise” World Flower Show in June 2017.

Madhu Shah was the Australian representative judge, Kim Baillie and Ngaire Gamack staged the Australian honorary exhibit as well as competing along with Judith Little in two classes each. The results:

Images are in the Gallery section.

Congratulations to Mary Sweeney on the 2016 Garden Clubs of Australia Joan O’Brien Award. This is for excellence by an individual in floral art announced yesterday (11 October).

Congratulations to Cecily Rogers – joint winner of the 2016 President of Garden Clubs Australia Award for outstanding contribution by an individual to gardening and/or horticulture.

A glimpse of the fabulous Mark Pampling and his work at our weekend in Gladstone, NSW 8/9/10 October 2015. 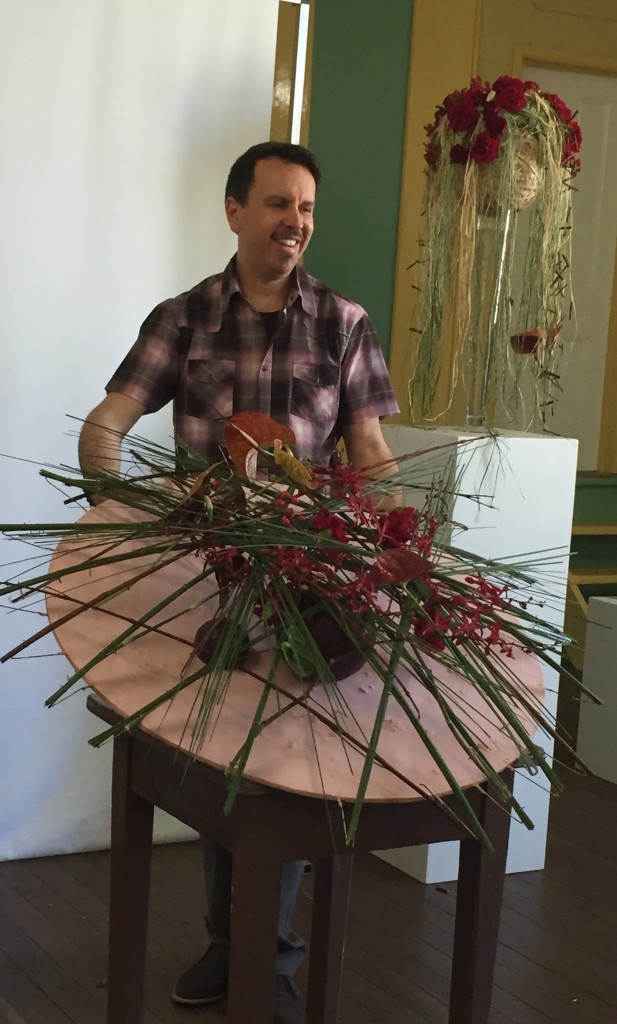 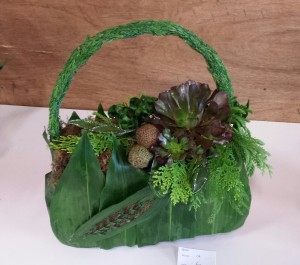 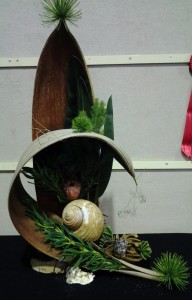 From the Mountains to the Sea – Kim Baillie

As you know Mrs Doreen Winkley of Grafton Floral Art Society has been awarded the GCA Joan O’Brien Award. Doreen was presented with the award at the Garden Clubs Australia Annual General Meeting in Sydney on September 16. 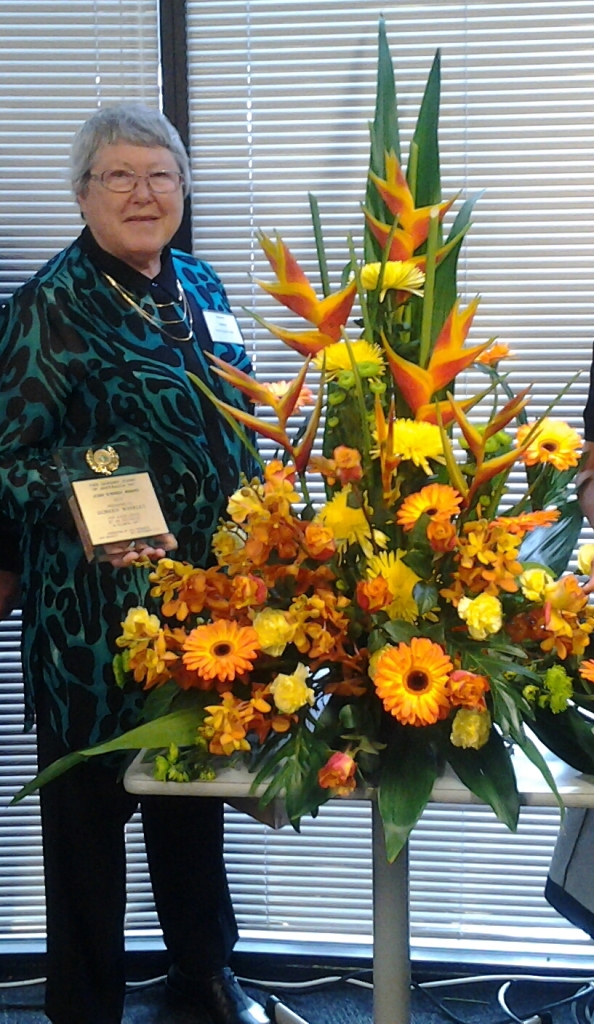 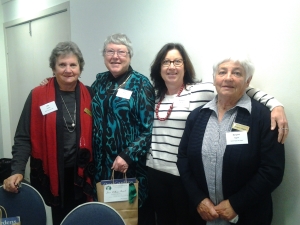 Congratulations are extended to Mrs Effie Crawley of the Gloucester Floral Art Group on being awarded the Ann Williams Clark Medallion. This award was established in 1998 by the Garden Clubs of Australia Federal Committee and is given for ‘long and outstanding service by a member to his/her affiliated club’.
Effie was presented with the award by NSW Floral Art Association President, Mrs Mary Sweeney OAM, following the Association’s AGM in Oberon on 29 August with assembled members and guests present.

Effie is a founding member of the Gloucester Floral Art Group, a qualified Floral Art judge and demonstrator and has been instrumental in organising floral designs and designers for displays, festivals, shows and fundraisers in the local community as well as Hunter Valley Gardens and the Manning Winter Festival. Just in the past 12 months she has travelled to Inverell, Kempsey, Newcastle, Wauchope, Stroud, Gresford, Dungog and Quirindi to judge competitions in floral art.

This is the only the second time the award has been presented to a member of the NSW Floral Art Association. Congratulations Effie and the Gloucester Floral Art Group.

I am delighted to announce that in the 2014 Garden Clubs Australia Awards, our nomination of Mrs Doreen Winkley for Achieving Excellence in Floral Art by an Individual, has been successful. 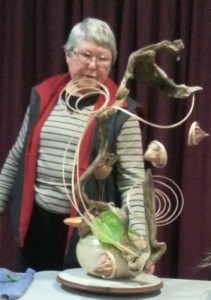 The executive and members of NSWFAA join with all those who have benefited from Doreen’s patient teaching and skilled demonstrations in congratulating her on this well deserved recognition.

The first meeting of the new Hunter CFD will be held at the Wangi Wangi Workers Club, Dobell Room, commencing at 2.30pm Monday 25th August 2014.

There will be demonstrations of traditional and contemporary floral art, a workshop to produce your very own table centrepiece and information on future meeting and activities.

Thanks to Susan Fitzgerald from www.vibrantireland.com for this photo of current NSWFAA President and Australian representative Judge, Mary Sweeney, with Irish Judge Mary Lawler beside the design awarded Best in Show at the WAFA Ireland World Flower Show in June 2014. 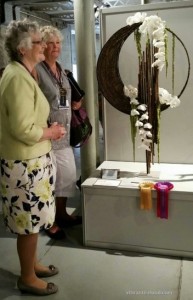 Well done all members who benched entries at this year’s Royal Easter Show in Sydney. Each Decorative session produced a different Champion – many are current NSWFAA members!

Lanny Pramana was also successful in achieving both the highest poinstcore and most successful exhibitor in the Decorative section.

CONGRATULATIONS to Helen Mitchell, NSWFAA Committee member, for her successful designs in the Interflora competition as part of the Sydney Royal Easter Show. We will have some photos here soon.

NSWFAA President, Mary Sweeney OAM, will be demonstrating floral art designs at 4pm on Friday 11 April and Monday 14 April in the Horticulture Pavilion.

There are no upcoming events at this time.

This Site Is Protected By
Shield Security →